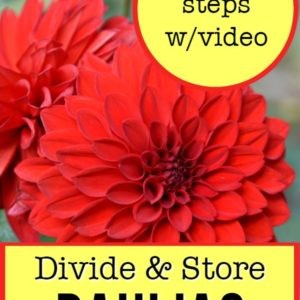 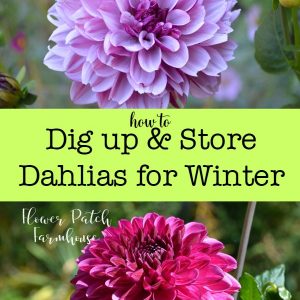 Digging up Dahlias for Winter Storage is easy.  Just grab your favorite shovel and get started. I show you how I dig Dahlias up then how I store them for winter with a free video!

Easy Dig up Dahlias for Winter Storage. I also show you in the video how to divide the tubers in Fall for more Dahlias next season!

We finally got our first frost and my dahlias are done.  Time for me to dig them up and pack them away for cozy winter slumber in my basement.  Digging up Dahlias for Winter storage is not hard at all.

When to dig up dahlia tubers (bulbs)

Many like to dig up the dahlia tubers before the first killing freeze but read on to understand why you may want to wait.

The longer the tubers are in the ground curing, the more fully developed the tubers are and the better the likelihood of their keeping over the winter.

You can start digging before frost or before the rainy season along the Pacific Coast. Most gardeners should seriously consider letting their dahlia roots continue to grow and mature as long as possible.

Most areas have a light frost that ruins partially opened blooms and top foliage followed by a hard freeze that may be a few weeks later.

If you want to dig up your dahlias before you have the first killing frost then that will work as well it just isn’t optimum.

This will encourage the eyes to start to really pop so you can more readily see where to divide the dahlias before packing up for storage.

Dividing the dahlia tubers is much easier in the Fall since the growth has not hardened.  Cut away any diseased or really old growth.  I have read it is recommended to cut away the mother tuber and store it separately as it can rot more easily and cause problems for the new ones.

This year I am going to try storing some of my tubers planted in one gallon pots and stored in my basement.  I will check them once a month like I do the tubers stored in the shavings. (update: this did not work for me, if you have tried it successfully let me know and we can compare notes)

We have had a warm Fall and they were still blooming fully when one night the temps dropped below freezing and that signaled for me to get ready to dig them up.

Here is the area at the base of this dahlia.  I cut off the stems to about 6 inches then leave in the ground for a few more days up to a solid week, to get those eyes popping!

How to Dig up Dahlias

To dig up your Dahlia tubers start the shovel back a good 6 to 12 inches from the stem so you don’t cut into any tubers that may have grown out that far. Some prefer a garden fork for this part. It is claimed it is easier to not damage as you dig with those type tools.

Dig down and lift gently getting a feel for how much heft it will take to lift the clump.  If the Dahlias have a lot of healthy growth the bunch of tubers can get quite heavy.

Thankfully my soil is loose and crumbly and they clump pulls up fairly easily.

So far I have done well with a shovel.

Work around the clump a little at a time and keep loosening the bunch of tubers.  If you have had a good year the amount of tubers from what you planted last Spring should have increased well.

It is better to start further back from the stem, like 12 inches back, so you can be sure you have got all the tubers.

Note: Dahlia tubers are quite fragile right after digging.  Let them sit for a couple hours after first digging before rinsing off the excess dirt and the tubers will be less likely to break off.

In the video I show you how I spray off the soil.  The Dahlias in the front garden had soil that was wetter and it clung to the tubers rather than dust off so using the hose was easier.

This is a rather small clump you get a better idea of larger ones in the video.

How to store them

Let the tubers dry off then layer them in animal bed shavings.  These are typically pine shavings you can get at a Farm supply store.  A single bale can last you a very long time.

Update: vermiculite was considerably more expensive and did not improve my success rate over the pine shavings. So I shall continue to use pine shavings.

I use various storage containers for my dahlias, a cardboard box, some like milk crates, or even a brown paper bag.  Just make sure the tubers are not touching each other.

Make sure to inspect tubers monthly during the winter. Throw away any tubers that show signs of rotting. By checking frequently you can prevent the rot spreading to otherwise healthy tubers. Some growers say that if one stores tubers so that they do not touch, then rot will not spread.

Pull the tubers out of the basement about March or April and take cuttings, I show you how here.  It works great and is a fun way to get more Dahlias!

I bought some of my Dahlias from Costco, Longfield Gardens was the supplier, they have a great Dahlia care article here. 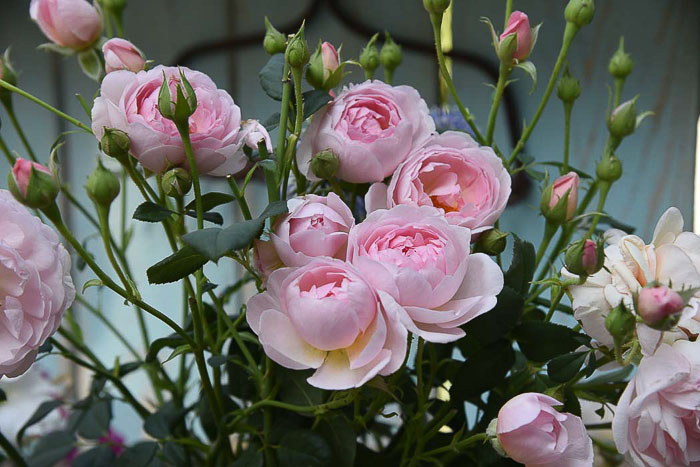 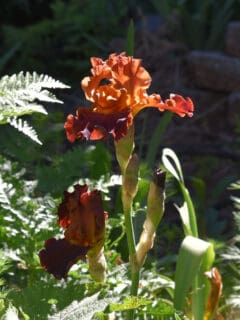 Next
How to Plant Iris and Do it Right
Click here to cancel reply.

I live in Charlotte NC. Dahlia's are new to me. I only planted 6 this year and they did great. But do i need to dig them up here. We don't really have freezing temps for long and hardly any snow. Thanks. Your blog is great.